The summer after my junior year of college, I went to England to study British literature in the places where it was written. It was a glorious time of reading, traveling, and watching our professor yell at sheep. 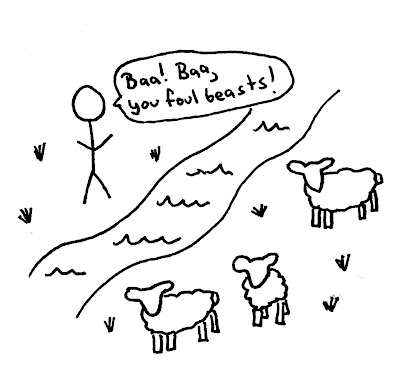 Before we headed overseas, we had a meeting to discuss logistics. Mostly it was a matter of determining roommates for various abodes, but one night we would actually have to choose between two possible accommodations: a youth hostel or the Camelot Castle Hotel.

Based only on their names and the mental images these conjured, I had no difficulty making my decision. I circled “Camelot Castle Hotel,” handed in my form, and began counting the days until our departure.

A few weeks into our British expedition, we arrived at Tintagel, the purported birthplace of King Arthur. We spent the day traipsing through a ruined castle and imagining olden days. 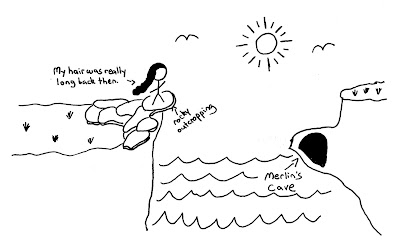 While Tintagel itself was everything I’d hoped and dreamed, the Camelot Castle Hotel left much to be desired. It was decidedly un-castleish in appearance, and the interior bore an eerie resemblance to Disney World’s “Tower of Terror.” This hotel had fewer cobwebs and a greater aroma of must, but they shared the same shabby, decaying décor.

I should have known something was up when the front hallway featured a signed photo of Tom Cruise, but I was too busy wallowing in disappointment to notice. Besides, the picture was obscured by an inordinate amount of paintings -- hundreds of modern art atrocities that were at odds with the 1920s era furnishings.

After avoiding the archaic lift and hauling my suitcase

up two flights of stairs, I entered my room and discovered a pamphlet lying on my bed. This contained a faux news article about the artist in residence, a man “more prolific than Picasso” whom the hotel owner had saved from drugs and rehabilitated into the world’s greatest painter. Possibly even more disturbing were the owner’s pseudo-mystical attempts at poetry, samples of which were also published in the pamphlet.

Most of our group went to explore the nearby village, where they befriended some of the townsfolk. The natives approved of the youth hostel but not the other accommodations. 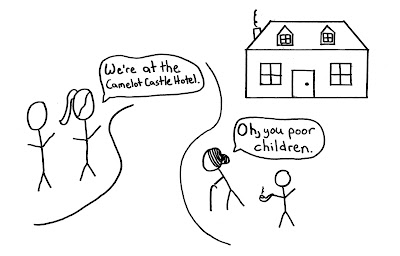 At sunset the group went en masse to the youth hostel, which turned out to be an absolute gem. Apples were roasted, stories were told, and all in all in was a magical night.

I missed all of this, however, because I was absolutely peopled out and desperate for some alone time. My evening was equally lovely in a solitary way, and I spent it gazing through an open window and thinking Arthurian thoughts. Eventually my roommate returned, and we took turns braving the highly sketchy bathroom before climbing into bed.

At about 11:00 that night, a few guys from our group were hanging out in the lobby when they were approached by a man wearing a velvet vest. This turned

out to be the hotel owner, and he became very friendly indeed. After a lengthy monologue on why Battlefield Earth was the best book ever and how the movie version utterly ruined it, he began telling the guys about the power of memory. He began by having one of them picture what he had for breakfast that morning. 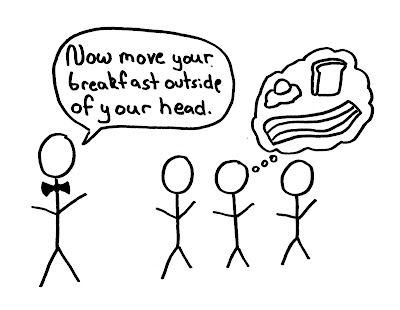 The owner went on to explain that this technique allows memory to be stored externally. This way you can keep your experiences from life safe between when you die and when you’re reincarnated later on. This is especially beneficial if you’re rich because with a bit of planning you can leave your money to your future self.

I missed this exchange as well because at the time I was tucked into bed and sleeping peacefully. As it turned out, however, I was staying directly above the bar, and as the night progressed the room filled with smoke. I awoke just after midnight, gasping for air.

It was late, I was tired, and I couldn’t breathe without choking. I jumped up and began throwing on clothing with a force so violent that I woke my roommate. 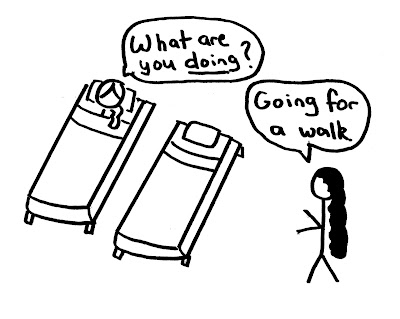 She tried to talk me out of nocturnal wandering, but I was adamant. I wasn’t particularly lucid, but I was convinced that 1. I would die if I stayed in that room and 2. it didn’t matter where I went as long as it was out.

The lobby was now deserted, and the washed-out furniture was a blur in my eyes as I headed straight for the exit. I burst through two sets of double doors into the pitch black night and made a right turn in preparation for a brisk stroll.

That’s when I stopped dead in my tracks. There was something about ten feet in front of me, and I did not like how it looked.

It was midnight at a creepy hotel run by scientologists, and I was staring at a shrouded figure that was faintly luminous.

I began to move forward, thinking how silly it would be to turn around so soon. Then I thought better of it and bolted back to my room, once again surprising my roommate and causing her to question my sanity.

The next morning I went outside to determine what exactly I’d seen and mistaken for something suspiciously supernatural-looking. It turned out that there was absolutely nothing that resembled what I saw.

But if I had kept walking in my intended direction I would have fallen off the cliff. 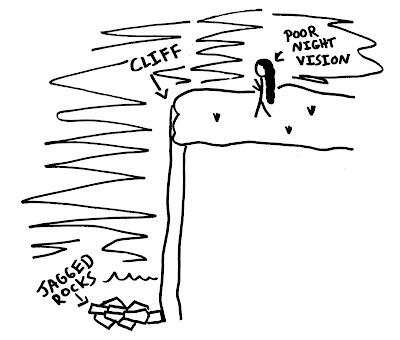 Every now and then I google reviews of the Camelot Castle Hotel and chuckle at the stories of the owner dragging unsuspecting guests into the basement, showing them a special “light box,” and then offering them the chance to buy paintings for $10,000 each. It’s just as bizarre as when I stayed there.

The moral of the story, I suppose is that scientologists and Arthurian legend just don’t mix. Or that they mix too well.

It could also be that I shouldn’t judge places on name alone.